Editor’s Note:The “black swan” incident of the COVID-19 outbreak has led to the temporary shutdown of the global supply chain, making China the “gray rhino” in the world economy. To be sure, COVID-19 will not impede the process of China’s economic transformation and urbanization, but will change their development path.

The spread of the epidemic was accelerated by intense population flow, which is the characteristic of China’s “semi-urbanization”. Semi-urbanization is an incomplete state in the process of transforming rural population into urban population. This is manifested in the fact that farmers have left the countryside to work and live in cities, but cannot enjoy the same treatment as urban residents in many aspects such as labor remuneration, children’s education, social security, and housing, etc. They do not have political rights such as the right to vote and stand for election in cities, and cannot really assimilate into the urban society.

During the epidemic, non-natives became hidden hazards. Huge flow of people leaving and returning to cities have brought tremendous challenges to social governance. Especially when work and production is about to be resumed, the health screening, the tracking of suspected cases, and service for those in quarantine all bring pressure to social governance. The root of the huge population flow also lies in China’s traditional household registration system. To emerge from the semi-urbanization state, it is necessary to further step up reform of the household registration system, facilitate the movement of people to mega-cities, large cities and surrounding second-and third-tier cities, so as to allow them to settle and flow within city clusters. In this way, people will be able to assume a “fixed identity” in addition to their physical presence in cities, thus realizing the urbanization of people.

The epidemic requires us to reflect on urban planning. In the planning and development of cities, more small and medium-sized industrial communities are needed, with improved integration between industries and city functions, so as to reduce the ineffective flow between different urban areas. For epidemic prevention, control and follow-up measures, this will make it easier to take differentiated measures in different city areas, and resume work and production accordingly, so as to minimize the impact of the epidemic on the city.

What has happened in this epidemic points to the notion that first-class city clusters are the future of China’s development. Of course, in the future, challenges faced by the development of city clusters will come more from the coordination between regions and between cities, the integration of industrial chains, and the supply of high-quality public services required by high-intensity population flow. Only on a larger scale can we provide public services of higher quality. 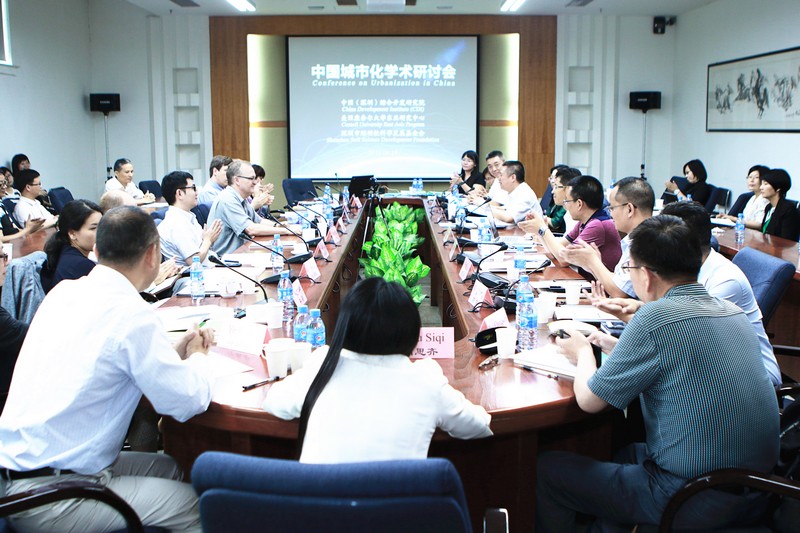 The seminar invited experts from Cornell University and CDI to have discussions on China’s urbanization.

15:05-15:20 No More Tiers: Navigating the Future of Consumer Demand Across China’s Cities

15:20-15:35    Internationalization of Tourism in China's secondary cities: The Case of Wenzhou

President Fan Gang pointed that there are two major problems facing China’s current urbanization: first, can rural migrant workers stay in urban areas? This is the most fundamental question; second, the relationship between large and small cities. “Research shows that migrant workers usually spent 8-9 years working in the city and then returned home for whatever reasons, such a phenomenon is called “Early Withdrawing”, which means migrant workers drop out very early from urban labor forces.” said Fan Gang. He thinks that China’s labor shortage should not be attributed to the decrease of birth rate or population, but the fact that migrant workers and it hard staying in the city.

How to deal with “Early Withdrawing” of migrant workers? Fan suggested a progressive and gradual equalization of public social services is the way out. Government should solve such issues as migrant workers’ employment, pension, health and housing, and their children’s education. With regard to the relationship between large and small cities, Fan Gang holds that at this stage, people will continue flooding to coastal regions and central cities. The most important effect of urbanization is the cluster effect. If this rule is ignored, there will be insufficient planning in large cities, leading to various kinds of “city diseases”. What’s more, there will be excess housing in small cities.

Chinese megacities are generally facing the problems of traffic congestion and rapid rise of house prices. With regard to the future solutions for Chinese megacities, Dr.Hu Caimei from CDI suggested taking the “Metropolitan Area development approach”. In this “Metropolitan Area”, there should be an inter-connected rail transit system, administrative zoning should be decentralized, and a Metropolitan Area statistical system should be established. Bi Yalei from Shenzhen Advanced Technology Institute of the Chinese Academy of Sciences suggested using big data to solve the urban traffic problems, and provide a smart transportation solution that improves travel efficiency.

CDI research fellow Zhou Lin approached the issue of urban villages from a global perspective. Zhou noticed the labor demand in Pearl River Delta economy is featured by regular rises and falls. Let’s take iPhone as an example. Before the launch of a new product, there will be a huge amount of orders, which requires a large amount of labor for highly intensified production. However, when this production peak is over, many migrant workers will resign and hunt for their next work. This highly episodic mode of production calls for a tidal labor market to match with. The urban villages in the Pearl River Delta are where the tidal labors live and gather. For example, in Xiufeng Industrial Town, Gankeng Village, Shenzhen, a lot of dormitories have been built in the factory, but they are completely vacant. The vast majority of employees choose to live in Gankeng Village. From the perspective of the tidal labor market, dormitories are not good for the flow of labor, although they are free of charge. In contrast, living in urban villages gives migrant workers a lot of freedom in choosing where to work. They can work in Factory A in the first half of the year, and change to Factory B in the second half of the year while still live in their urban villages, saving trouble of moving out all the time.

Nick Admussen, from Department of Asian Studies, Cornell University, gave a presentation on Modest Proposals for the Reform of Green Narratives, and redefined the relationship between cities and nature. He opposed discussing environmental issues with old narratives, and advocated using new narratives to design public spaces. In Nick Admussen’s opinion, traditional narratives define nature as the opposite of human beings. For example, the tourism advertisements, nowadays, encourage people to go to less-populated places, and bring money from the city to the country to initiate new economic activities. The result is that, as tourism becomes more successful, there is more pollution caused by man. He believed that in the future, we need to focus on the big system consisting of air, land, water, weather, animals, plants, and man, as man is only a part of this big system.