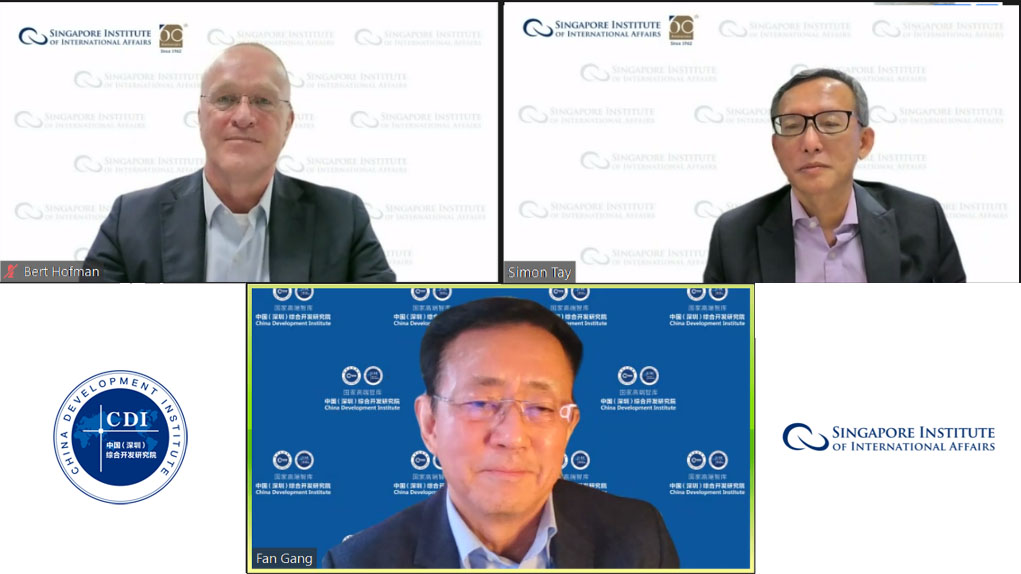 On April 19, Prof Fan Gang, President of China Development Institute, and Prof Bert Hofman, Director of the East Asian Institute at the National University of Singapore, provided their insights on China’s economy in the hybrid talk held by the Singapore Institute of International Affairs.

The second quarter could see 2% growth, lower than it is expected due to the resurgence of the epidemic, which exerts negative effect on consumption, production and transportation. Collective efforts are being made across the nation in speeding up vaccination rate, building module hospitals and launching more stimulative measures, in hope to contain the pandemic and reactivate the market.

China’s government debt over GDP is at 46%. Comparatively, Japan is at 260%, U.S. 130%, and European countries are mostly over 100%. With enough reserve and resources, China’s debt issue is generally manageable. It is also trying to improve the efficiency of distant spending. China has announced the third pillar pension system, which is a privately supplied pension saving scheme, providing people an alternative for investment while preparing the society for an aging population.

Green investments in energy transition could be the next growth driver for China’s economy. Investments in urbanization will continue to be crucial, as the urbanization rate in China is still lower than that of most developing countries which shows that urban facilities and services are in great need. At the same time, as the service sector grows and consumption prices increase, China’s share of exports in GDP will begin to decline.

China is strongly connected with its Asian trade partners. With RCEP taking effect in 2022, China will further open up to its regional partners and with whom jointly promote regional economic growth.