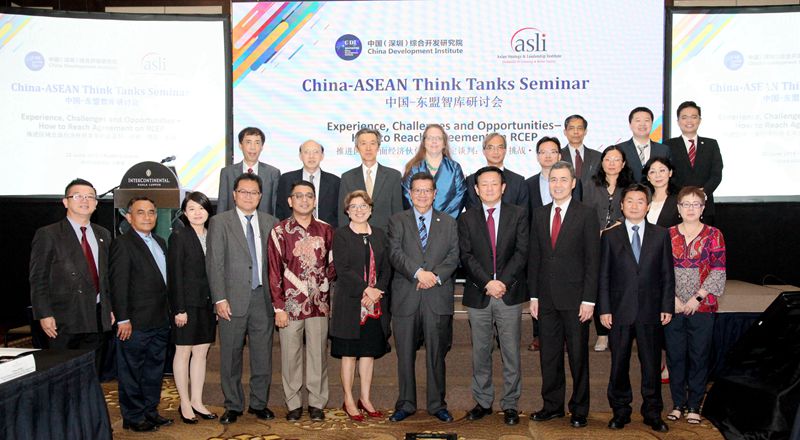 Theme: Experience, Challenges and Opportunities – How to Reach Agreement on RCEP

If completed, the Regional Comprehensive Economic Partnership (RCEP) will create the world's largest free trade area, covering almost half of the world’s population and contributing about 30 per cent of global GDP. The Ministers from the 16 RCEP participating countries reaffirmed their resolve to meet the Leaders’ instruction to intensify efforts in 2018 towards the conclusion. The 11 remaining countries in the Tans-Pacific Partnership (TPP) have forged ahead with a new deal without the United States. What does this mean to the RCEP? Should the RCEP still move on? What should be done to push forward the RCEP? What are the differences between the RCEP and the TPP?

Although the potential future economic scenario is good, the RCEP is still confronted with obstacles and challenges. It takes time to negotiate a new set of rules and obligations, such as tariff rates, intellectual property rights, trade and investment etc. In spite of this, the flexible and pragmatic approach of the RCEP is expected to be more suitable for the developing countries in Asia.

In order to push forward the RCEP negotiation, countries in the region need to exert effort on proposing constructive suggestion. How can the RCEP build on the experience of the TPP? What challenges will the RCEP be faced with in the course of future talks? What opportunities will the RCEP deliver for the 16 RCEP participating countries? These are the focus for the discussion during the meeting.

“Although multilateral relations are in questions now, China has promised further opening-up, which is in China’s interest. China’s further opening-up in the fields of investment and trade is its sincere will and concrete step toward further integration into the global multinational system. China has to make improvements over its trade and investment system both domestically and internationally as China has already developed a few steps forward and needs to respond to requirements of multilateral organizations. Therefore, China will open further for the investment and service sector, stop the practice of ownership control, and respect the rules of intellectual property rights.”

“The RCEP is faced with two challenges to become the 21st century model agreement for inclusive growth, namely, balancing different levels of ambition and need for flexibility and being commercially meaningful. ASEAN, as the driving force of the RCEP negotiation, must draw out possible mutually beneficial positions to help members adhere to a common and ambitious set of rules, and have transparent and consistent consultation with stakeholders to ensure inclusion of elements that resonate with the business community. The RCEP must also have three key interdependent dimensions: broad and deep market access, rules that promote confidence in trade and commerce, and economic cooperation.”

“We are in an environment where FTAs are becoming more and more important and the prospect for increased collaboration worldwide will continue. There are the immense potentials of the RCEP agreement to the ASEAN Plus Six countries, including enhancing economic growth, creating more employment, improving connectivity as well as raising the standards of living of people in the RCEP region.”

“The completion of the RCEP negotiations as soon as possible is important for the Asia-Pacific region as it needs to cope with the pressures or challenges of proliferation of trade protection measures and the resulting economic transformation in the region.”

“There are four key lessons for the successful negotiation of the RCEP: essential roles of leading members, wisdom in keeping core principles while accepting flexibilities, a need to see arrangements as catalyst for domestic reforms, and building consensus.”

“The TPP had one powerful dominant country to drive talks, while the RCEP has 10 trying to drive negotiations, which makes it quite hard for the megaregional. The RCEP can use the TPP in the following aspects: The RCEP can start with the TPP rules of origin and modify them if necessary; some of the IP rules, especially for digital, should be added; the TPP update to global rulebook should be thought about carefully in the RCEP as helpful now. Other elements need to be taken into consideration of the RCEP should include the e-commerce rules and SME angle as Asia is advanced in the e-commerce sector and the RCEP economies are mostly composed of smaller firms.”

“There are following five points useful for the RCEP negotiation: stakeholder engagement and third-party validation, the role of APEC as an incubator, maximizing negotiation time, accurate pool of negotiators, and strong leadership.”

“A more ambitious and progressive FTA strategy is needed for China. China should pursue larger bilateral and regional agreements such as RCEP, CJK, EU-China BIT. In face of US protectionism, the RCEP members should take more courageous actions to lift the ambition level of RCEP toward CPTPP with a vision to merging into an Asia Pacific economic community.”

“The RCEP participating countries should work together to achieve the RCEP’s goal of the high level of services and tariff liberalization and investment protection. Going beyond the level of concessions under ASEAN+1 FTAs is very important. The RCEP negotiators must strictly follow the Guiding Principles and Objectives for Negotiating the RCEP. To achieve commercially meaningful outcomes, ASEAN should agree to eliminate tariffs on 90% of all goods and will raise the elimination of tariffs to cover 92% of all goods. The RCEP should introduce more trade facilitating cumulation rules.”

“Completing the RCEP is very important to show that the region remain committed to economic integration, but it is also important to reach s high quality agreement. There should be clear and detail timeline on the next step of the agreement. An institutionalization of the RCEP might help, but increase complexity. Alternative choice is to look at other initiatives but ensuring that they are inclusive and supportive to the idea of reducing development gap in the region.”

“The RCEP negotiation is faced with the following challenges: the relatively large gap in economic development, different levels of market opening, differences in services and investment fields, and controversy over the rules. China’s experience proved that a country can get more from the expansion of trade and the increase of investment led by an FTA and that market opening with domestic reform is beneficial to domestic economy on the whole. RCEP member states should enhance experience and policy sharing to build more consensuses, cooperate to push forward the negotiation process and show flexibility in resolving negotiation difficulties.”

“The RCEP emerges as an inspiring plan for regional trade and economic cooperation. At the same time, Belt and Road Initiative (BRI) comes into the global economic development arena with a strong momentum. The ASEAN has already created the AEC. In light of this, the synergetic efforts through cooperation and coordination within these three regional players would certainly contribute huge opportunities for the socio-economic development of the region. Nevertheless, orchestrating different institutes always has been a difficult task with a host of challenges, including connectivity, financing and streamlining among the cooperating institutions. However, flexible negotiations and pragmatic implementations could overcome the challenges.”

“The RCEP needs to move on to complete its negotiation process in an uncertain global trading environment. The BRI pursues its course to deliver China’s connectivity projects to deepen its long-term plan of China’s economic integration and cooperation with neighboring countries. Interplay between the RCEP and the BRI could become the main facets of future interconnections. The issue is how possible, how deep and how far to turn this potential into a reality without omitting other regional frameworks.”

“The BRI is expected to complement the RCEP over the long term as it would be a platform to further strengthen relationship between China and the ASEAN. The RCEP is anticipated to play a critical role in the BRI to promote trade and investment. The BRI adds synergy with the RCEP for regional connectivity and reducing development gaps between nations in the region. Countries from the RCEP and BRI should cooperate in constructive consultation. The BRI and RCEP implementations are the tasks not only of governments, but also of private businesses, academia and people.”

“The RCEP seems to have a kind of urgency because of the trend of de-globalization which are the driving force for extremism, protectionism and unilateralism, and the trend of the shift of the global economic balance. What is badly needed now is to rescue or amend the global financial and trade infrastructure. As a result, we need to go fast with the RCEP negotiation. We can have an RCEP Plus and Hong Kong is ready to join. The BRI is a globalization initiative with Chinese characteristics. Only when China and host countries work together, will the BRI deliver win-win results. China needs to know how to do it.