CDI International Report on Economics of the Anthropocene 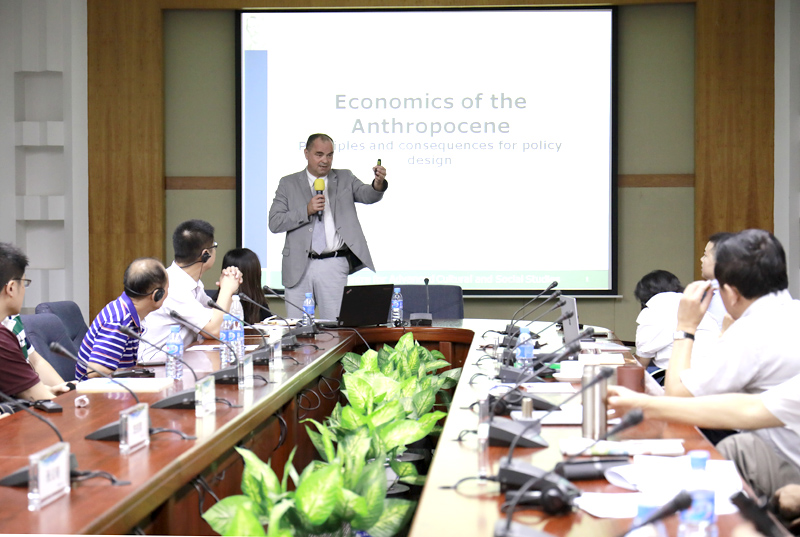 CDI invited professor Carsten Herrmann-Pillath from Max Weber Centre for Advanced Cultural and Social Studies at University of Erfurt to share this ideas on the principles and consequences for policy design from the perspective of anthropocence and have discussion on how to strike a balance between energy consumption and economic growth to achieve a sustainable development.

Theme: Economics of the Anthropocene: Principles and Consequences for Policy Design

10:05-11:05    Economics of the Anthropocene: Principles and Consequences for Policy Design

Humankind has entered a new geological age, the Anthropocene, in which the technosphere, created, but not controlled by human action, evolves autonomously.

Human impact on Earth system is so pervasive that geologists have diagnosed a new geological age, the Anthropocene, in which the central phenomenon is emergence of the technosphere. In the Antropocence, Human thermo-dynamic impact is comparable to geological forces. The technosphere attempts to encapsulate in geological terms the bulk of human artifice, like urban areas, rural housing, pasture, cropland, etc. In essence, the term represents the “summed material output of the contemporary human enterprise”. Human action caused the emergence of the technosphere, but human design cannot control its evolution. Technology is a global network of humans and artefacts that evolves autonomously.

Economic growth and energy throughput are manifestations of Maximum Power and Maximum Entropy principles, and urbanization is the material embodiment.

All open, non-linear and non-equilibrium systems manifest the Maximum Entropy Production Principle, mediated via the Maximum Power Principle governing evolution. Economic growth manifests Maximum Power. Energy throughputs drive economic growth. The core type of mechanism linking energy and growth is ‘rebound effects’: Increasing efficiency in energy usage causes growing absolute throughputs. The city is a complex socio-technological system and central artefact of the technosphere. Urbanization goes hand in hand with increasing power densities. In particular, the economic forces that drive the concentration of cities and favour high-rise buildings also increase power densities. However, this creates a dilemma for further growth: The power densities of renewables and of urban settlements do not match.

Policy design must heed attention to these facts and must aim at switching to a new growth regime, the stationary state.

From the viewpoint of the theory proposed here, only solar energy can resolve the energy dilemma of the future. First, only solar energy is thermodynamically neutral, in the sense of, firstly, not feeding additional energy into the Earth system, and moreover, in harnessing the most abundant supply of energy in the least intrusive way. Second, only the use of solar energy follows Maximum Power, because it transforms radiation into usable energy, which otherwise would dissipate as heat, thus enhancing the free energy of the Earth system. Given the power density mismatch, however, this requires a fundamental rethinking of current patterns of urbanization. The basic approach is decentralizing the energy system, and containing further urban concentration.

Here are implications for policies.

The central policy measure must increase the costs of energy: the energy tax. Higher taxes on energy will push the energy price high enough, which will encourage people to switch to alternative energy sources. The long term vision is to combine a stationary thermodynamic state of the Earth system with a growing economy. With stationary population growth and an energy tax, combined with modern technology, a fundamental structural shift of the economy becomes possible. View the embedded image gallery online at:
https://en.cdi.org.cn/component/k2/item/389-cdi-international-report-on-economics-of-the-anthropocene#sigProIdd8e318fedd
back to top