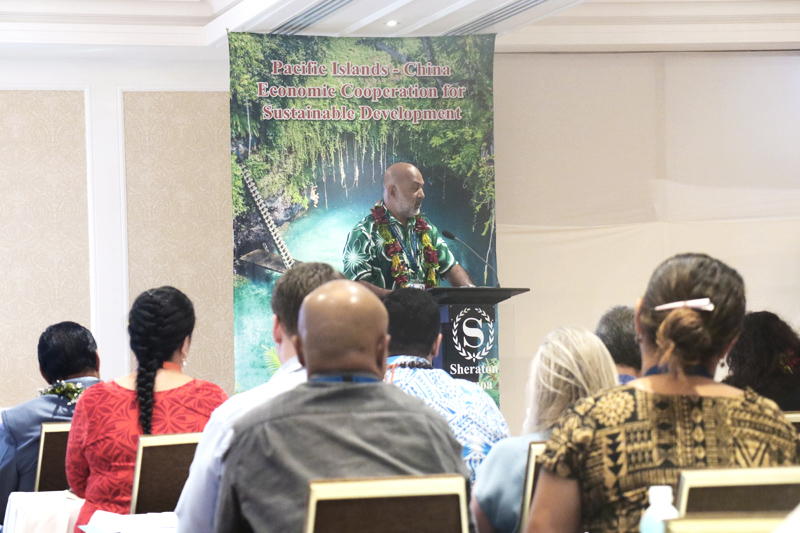 To further coordinate policies and joint operations with countries along the Maritime Silk Road for comprehensive, multi-layered and wide ocean-based partnership, China Development Institute, in collaboration with China Council for the Promotion of International Trade, the Government of Samoa and the Pacific Islands Forum Secretariat, held on September 8, 2017 a forum themed “21st Century Maritime Silk Road: Pacific Islands-China Economic Cooperation for Sustainable Development”, whose agenda contains the following aspects.

At the opening ceremony, the Minister of Industry and Labour of Samoa first outlined the status quo and challenges for the bilateral trade between China and Pacific islands, and stressed the importance of an even closer trade and economic relationship with China under the Belt and Road Initiative. China’s Special Envoy for Pacific Islands Affairs shared China’s policies for Pacific islands under the Belt and Road Initiative, and expressed China’s wish to continue to support the socio-economic sustainability of island countries.

The delegate of China Development Institute, focusing on the prospects for China-Pacific Islands cooperation, expounded on the opening up policies and achievements of the Belt and Road Initiative, and suggested that China and Pacific islands jointly seize the opportunity made possible by the Belt and Road Initiative, and accelerate the economic growth as well as China-Pacific trade and economic cooperation by enhancing partnership in macro-tourism, boosting trade and the provision of public goods in Pacific islands.

Improve infrastructure for an interconnected Pacific

Delegates of Pacific islands stated that the obstacles for China-Pacific trade and economic cooperation under current circumstances include long distance, small market and limited choice of goods. China and Pacific islands should enhance cooperation on international airline and maritime transport, improve air transport service networks among countries along the Maritime Silk Road to facilitate transport.

In respect to problems concerning infrastructure in the Pacific region, the delegate of CDI put forward three proposals: firstly, infrastructure shall start off before other endeavors with financial support by preferential policies to boost development, including that of the Asian Infrastructure Investment Bank and the Silk Road Fund; secondly, build industrial clusters capitalizing on infrastructure to form industrial parks for improved capacity of localization; thirdly, establish transport hubs and nodes to build an interconnected logistics network.

Explore pathways for sustainable tourism based on local conditions

The delegate of CDI proposed his perspectives for tourism development of Pacific islands that Pacific island countries shall operate more direct international flights along with customized services to attract a greater number of foreign visitors. In addition, China and Pacific islands shall encourage the exchanges among important cities and build a tourism network for Pacific islands by operating direct flights among them.

Fishery represents the most abundant resource of Pacific islands, which however is threatened with overfishing of certain species. The delegate of China believed that despite rich marine resources, the economy of Pacific islands remains underdeveloped. China’s far ocean fishery sector shall pool advantages to utilize local fishery resources in a rational manner through regulating the market behaviors of fishery companies and aligning with local policies and regulations.

The delegate of CDI believed that the current over-dependence on “far-ocean fishing” constitutes an important factor behind the difficulty to achieve economies of scale among Pacific islands. In future, “far ocean aquaculture” shall be made an integral part of “far ocean fishery”, and it is also advisable to integrate multiple businesses including fishing, aquaculture, processing, angling, leisure travel and experimental tourism to explore scalable marketing models for multiple islands as one collective tourist destination.

The meeting has significantly deepened China-Pacific bilateral relations, firstly, has provided a platform for delegates and experts from important sectors including trade, investment and tourism from China and the Pacific region to gather together for effective communication. On the one hand, it has led to a clearer understanding of the course of development for China-Pacific trade and economic cooperation in future, and on the other has provided timely and complete market information and investment guidelines for Chinese companies investing in Pacific islands, thus reducing their risks in overseas investment.

Secondly, the Belt and Road Initiative, which involves interconnectivity of transport and integration of telecommunication networks, provides Pacific island countries currently marginalized in the global economy a significant opportunity to integrate with the Chinese market through increased economic cooperation. Thus, China should make full use of this opportunity through preferential loans and development assistance to support infrastructure construction in Pacific islands according to local realities and proactively facilitate their efforts to improve such sectors as transport, trade, logistics and tourism.

Moreover, to serve the construction of the China-Oceania-South Pacific passage and to provide intellectual support for trade and economic cooperation between China and Pacific islands under the Belt and Road Initiative, China shall conduct in-depth study of countries along the Maritime Silk Road and organize visits to those countries for Chinese companies having an interest, and have a better understanding of the interests and concerns of relevant island countries, so as to facilitate targeted investment and project assistance, in a bid to effectively meet the demand for public goods and services in Pacific islands.

View the embedded image gallery online at:
https://en.cdi.org.cn/component/k2/item/378-pacific-islands-forum-leaders-meeting-official-side-event#sigProId6521e7049e
back to top