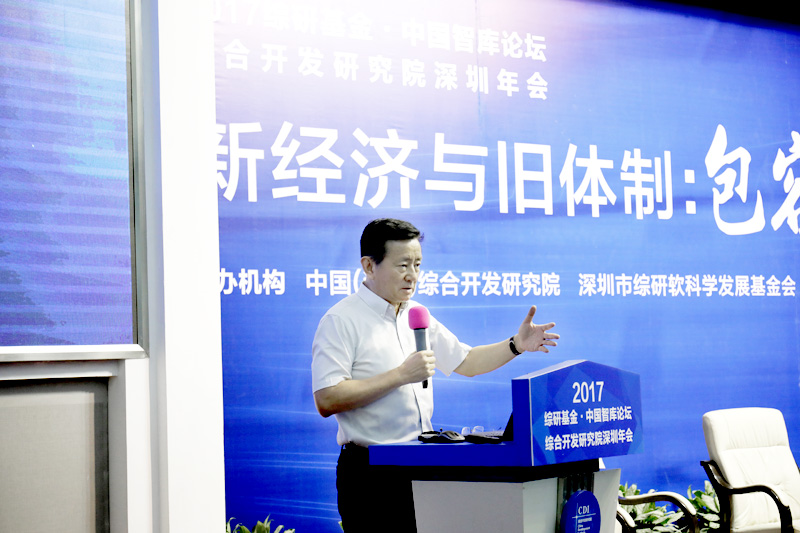 The annual meeting is intended to explore the way to update management procedures, regulations, optimize and deploy innovative resources efficiently with new economic engine introduced in place of the old one, as China’s economy is transitioning to a new normal. It also serves as a productive platform for Chinese enterprises and the academia to discuss how to accelerate the sound development of new economy and to seek policy proposals for the reference of policymakers.

Here are excerpts from the Shenzhen Annual Meeting 2017.

“There is still the ongoing conflicts between the new economy and the old system”.

“China’s economic structure shows a lot of exciting changes. The growth pace of the new economy, new business forms and models is staggering”

While new technologies and industries bring about large-scale investment in fixed assets and the upgrading of consumption, they have also created an extremely flexible labor market for a large number of informal and flexible economies. But faced with problems of fragmentation, regulatory lag, absence of regulation and overlapping functions, the implementation measures of policies and regulations are crucial.

“To develop the new economy, a shift in management concepts is essential.”

The “three-in-one” system of BGI can boost effective interactions among scientific research, clinical medicine and industries to foster a long-term sustainable development model. BGI’s efforts in this era of life economics can bring gene-related diseases including smallpox and polio under complete control, and in which process find solutions to problems related to the new economy and the old system.

“The shift in mindset to be the precondition for innovation in policies related to foreign capital, namely, to change the thought of state of invest import to export”

“Shenzhen is able to become the first city to ever formulate a law on science and a law on new scientific research institutions.”

The management systems for capital, personnel and whatsoever are lagging behind. This means that scientists are actually trying to innovate with heavy shackles. Therefore, how to innovate management to liberate the productivity of science and technology will be one major challenge for us.

With what we have understood to be the trends of the new economy in future, the discussion about the new economy and the old system will only be meaningful based on the consensus and sharing among government, research institutions and industries. And with the rise of the new economy, sharing, in replacement of labor division, is growing into a more dominant structure of the whole economy.

“The external support and the innovative awareness of enterprises themselves help Shenzhen become China’s innovation hub.”

First, Shenzhen boasts a unique social atmosphere where innovation is encouraged and failure tolerated, and most importantly the government’s support, guidance and inclusiveness, as well as intellectual support by research institutions for relevant industries. Second, the enterprises have set high standards for their own industries, give importance to core technologies and the building of core technical teams, as well as the sustainability of innovation concepts to lay a solid foundation for continued innovation in future.

“The promotion of the deep integration of innovation resources is the key to the prospects for innovation development.”

The concept of "one foundation and two integrations” really matters. “One foundation” refers to the development of the digital economy, especially the new economy and emerging business forms. "Two integrations” refers to the deep integration between the manufacturing and service industry, and the gradual integration of trade and investment from an open perspective. However, attention must be paid to the balance between innovation and regulation, as well as the inclusiveness of the system.

“A combination of various policy instruments should be adopted by all sectors of society to speed up the integration of innovation resources towards an even more enabling policy environment for industries.”

Qianhai’s status as a place where the “bay area, special zone and free trade zone” overlap has brought considerable resources to the district. In the process of developing new business forms in Shenzhen, the government promotes industrial innovation through incentive policies and proper regulations, which plays a positive role in promoting industrial innovation in Shenzhen. View the embedded image gallery online at:
https://en.cdi.org.cn/component/k2/item/366-shenzhen-annual-meeting-2017#sigProIdd89ce3610c
back to top