Housing Supply and Demand in Big and Small Cities: Why the Difference?

Editor’s Note: The latest upsurge in land price and housing price revealed an important policy reason that it is the urbanization strategy that has caused polarization in cities. It is crucial to follow the law of population migration and urbanization to free up more land for the development in big cities. 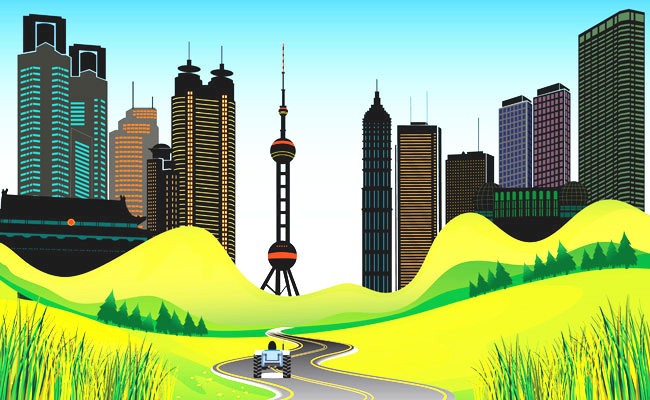 The latest upsurge in land price and housing price revealed an important policy reason that it is the urbanization strategy that has caused polarization in cities.

The basic rationale of urbanization is agglomeration. The greater the agglomeration is, the more advantages it brings. Township enterprises move into big cities because costs of roads and electricity in rural areas are pretty high. By contrast, building development zones in the vicinity of cities boasts a number of advantages including lower-cost infrastructure and more convenient logistics, thus more businesses can be supported with the same amount of investment. Industrial agglomeration creates jobs and income, and thus attracts people.

Large population in big cities generates jobs in the service sector. The service sector is an outcome resulting from socialization of family life. When family life is socialized, jobs are created.  Population agglomeration can create new economies as well as new knowledge. According to the knowledge spillover theory in economics, the stock of knowledge, when pooled, can proportionally produce knowledge increment. The advent of excellent schools and hospitals as well as new forms of culture in big cities is precisely the result of population agglomeration.

China currently sets a limit on the population in big cities, which means the supply of public goods, including land, is not arranged in accordance with the anticipated population influx in the future. However, it is futile to set such limits to restrict migration, for the population in big cities will soon go beyond the set limit as long as people are willing to move in. This will give rise to polarization in cities, which refers to the disparity in population flow between big and small cities. On the one hand, the population influx in large cities causes a serious imbalance between supply and demand; on the other, population outflow from small cities and towns results in supply far outstripping demand. This indicates a flaw in the urbanization policy, which goes against the law of human migration, urbanization and industrialization.

With the country in an ongoing process of rapid industrialization, population keeps migrating into cities, and yet the retired population has not reached a considerable size. Therefore, small towns that are not located within big city clusters will be facing challenges and difficulties to develop at the present stage. Some of them will probably die out with the population outflow. Yet it’s just that the prime time for development has not come for most of these towns. As a matter of fact, population outflow is also a way of development, as it is conducive to the increase of per capita income in small towns. In addition, preservation of old houses, natural environment and distinctive culture in small towns could also prepare the towns for the backflow of retired population in the future.

It is crucial to follow the law of population migration and urbanization to free up more land for the development in big cities, including the surrounding small towns. Once population concentrates in big cities, tension between supply and demand will arise in housing, transportation, public security, social security, and other public services. To crack the problems, we should make massive further adjustments, which should no longer be limited to controlling housing prices by simply imposing a property purchase limit, but also levying property taxes, increasing urban floor area ratio, reforming rural land system, and adjusting the urbanization development strategy, etc. The underlying logic of the purchase limit should be to ensure that the limited supply of housing units goes to those who are in need, not to those who speculate in real estate. Property purchase limit is not an absolute necessity as property tax can be implemented instead. Property tax boasts inherent stability, which means the higher the housing price, the higher the tax. If the property tax is high enough, rather than less than one percent in trial cities like Shanghai and Chongqing, it will eventually come into play.