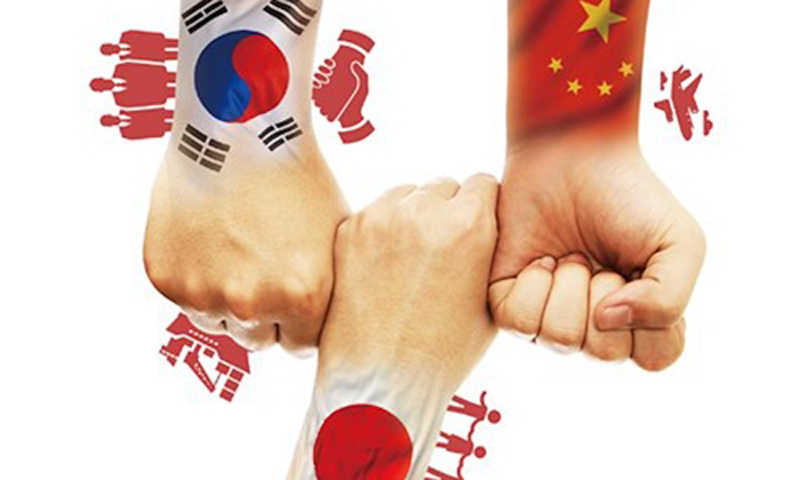 Editor’s Note:Confronting the deadliest virus in a century, China, Japan and South Korea demonstrated remarkable solidarity. The three nations in East Asia are giving helping hands to each other in hard times. In early February, when China’s confirmed cases were climbing, Japan and South Korea provided China with urgently needed protective gears, though they also face the danger of domestic transmission.

Now, when COVID cases are subsiding in the East Asia continent, China has been ramping up efforts to support Japan and South Korea and sending them medical supplies in large quantities. In an era where trust between major countries is running low, such mutual help and aids in combating COVID-19 is an uplifting sign that China, Japan and South Korea could upgrade their cooperation on health issues to a new level.

First, peoples in the three countries share a common cultural heritage and tend to sympathise with each other in the face of natural disasters. Recently, aid workers in the three countries printed classical verses from The Book of Odes (China, 1046-700 BCE), poems composed by Prince Nagaya (Japan, 685-729 CE) and Choe Chiwon (Korea, 857 CE) on packages of medical supplies as a unique way of expressing solidarity. Looking back at history, we can see the three nations had also proactively come to each other’s help during massive disasters such as the 2008 Sichuan earthquake and the 2011 Tohoku earthquake and tsunami. Warm memories like these provide an optimal starting point to pool the three countries’ resources toward disease prevention.

Second, China, Japan and South Korea’s respective responses to the pandemic bear similarities, which is conducive to a consensus on how to deal with a large-scale health emergency. In fighting COVID, the Chinese government showed strong determination, carried out the lockdown, reversed the trend, stopped the contagion and restarted the economy. Meanwhile, with mass testing, the use of big data and contact-tracing technology, South Korea implemented a nuanced approach that flattens the curve without shutting down the entire economy. On the other hand, Japan has been exploring a softer approach and trying to keep COVID’s disturbance to the national economy to the minimum. Despite their differences, China’s ‘hard’ solution, Japan’s ‘soft’ approach and Korea’s ‘middle way’ are all based on effective leadership of the government, the values of collectivism and the proper state intervention. These shared traits of the three nations’ responses to the coronavirus could facilitate their collective actions to tackle infectious diseases.

Third, the close economic ties and frequent movement of people between the three countries makes joint mechanism against infectious diseases an absolute necessity. In 2019, China was the biggest trading partner of both Japan and South Korea; while Japan and South Korea were China’s 2nd and 3rd largest trading partner, respectively. China is also South Korea’s biggest export market and its largest origin of imports. As of 2018, Japan remains the largest cumulative investor in China, with US$ 112 billion in investments. Chinese visitors to Japan increased tenfold in the recent ten years, reaching 9.59 million in 2019. Similarly, Chinese visitors to South Korea numbered 8.07 million in 2016. According to the statistics of the Embassy of Japan in China, about 140,000 Japanese citizens live in China, while the number of Chinese citizens residing in Japan amounts to 674,000.

To sum up, China, Japan and South Korea have a shared destiny in the face of contagious diseases. The three countries are so near to each other, their economies are so intertwined, and travellers between them are so numerous, that a disease outbreak in one country will quickly spread to the other two nations. The SARS in 2003 was the first strain of coronavirus posing a threat to entire East Asia. Later, in May 2015, only eight days after Korea reported to the WHO the first domestically confirmed case of MERS, China had seen the first imported case, which incurred as many as a hundred contacts. Although MERS did not spread widely in Japan and China, it did show the weakness in the disease prevention system in East Asia. The current COVID crisis should serve as a ‘wake-up call’ that the three countries should join together to fight the virus and build a joint mechanism to tackle future epidemics: