2020 was an extremely tough year for both China and the United States. China withstood the test of the pandemic and the US-Sino trade conflict, while the United States also went through the pandemic as well as election chaos and social problems induced by political division. If the social, economic, and financial conditions of either of these two countries continue to deteriorate, it will be detrimental to both the global economy and to global finance.

In the next few months, China and the United States will continue to negotiate. Competition is inevitable between the two countries, but the confrontation needs to be managed and controlled. Meanwhile, the two nations should continue to cooperate on dealing with climate change and the COVID-19 pandemic, as well as regional and global governance issues. Professor Xiao believes that the biggest challenge of 2021 willbe to explore new, more complex, and more pragmatic ways for the super-powers to cooperate, compete and coexist. He also believes this will be the new normal and the basis for the future world’s peace and prosperity.

On how the global economic and financial risk structure has shifted

The monetary policy of United States is widely thought to be irresponsible, including the fiscal expansion policy supported by zero interest rates and printingmoney. Professor Xiao proposes that there are two sides to this story. This policy has given the U.S. economic and social stability, which has benefitedboth the U.S. and the rest of the world. However, it also causes significant uncertainty for the U.S. financial market, as well as the global financial market, as the value of assets theoretically cannot be determined with zero interest rates. Asian countries in particular should be prepared as they will be on the forefront of any global financial market turbulence, because theyhave the most foreign exchange reserves and their currencies are closely linked to the U.S. dollar.

On how inflation expectations will be influenced

Regarding inflation expectations, it is important to distinguish between asset price and consumer price. The consumer price index (CPI) is expected to be controllable in 2021, partly because of China’s great impact on the price of products manufactured globally. Compared to other countries, China’s supply capacity is less affected by the pandemic and has even been improvedvia supply-side structural reforms. China thus has a defining effect on the price of global manufacturing products.

Furthermore, the CPI may not necessarily reflect inflation expectations. Inflation is mainly reflected by the revaluation of assets. China’s net wealth has increased much faster than its GDP growth over the past few yearsbecause China’s marketization has led to asset and exchange rate appreciation. This trend is in line with economic laws. However, it should be noted that some assets have not increased in value.The market decides the value of an asset. The valuation of some high-quality assets thus rose while other fell, including the valuationsof real estate and stocks. The funds released by COVID-19stimulus and relief measures were more likely to flow to high-quality assets. High-quality assets around the world have therefore been revalued, including those in the United States and China. It is therefore important to have a clear understanding of the market, and to revalue the assets in conformity with market trends.

On the development of GBA financial ecosystem

It is important to move quickly to explore how Hong Kong’s mature offshore financial system and the overall ecosystem can be extended to GBA, as this is a time-sensitive issue. This innovative approach, based on the “one country two systems” principle, will allow Hong Kong’s primary financial institutes and enterprises to operate under local supervision using Hong Kong’s common law and currency within the GBA trial zones. It will also be instrumental to overcome the protection towards industries and monopoly seen in Hong Kong, as well asto make up for its limited physical space and market. Further research is thus required into the connectionbetween Hong Kong and Shenzhen markets with the goal of building a unified market in the GBA.

Professor Xiao suggests that, as the conduit of “internal circulation” and “external circulation”, Hong Kong’s strength in market and economic openness should be combined with the GBA’s advantages in market scale, production resources and its local government’s ability to coordinate resources and centralize execution. Although Shenzhen and Hong Kong compete with each other as financial centres, the two are within the same financial cluster equipped with two distinct functions – offshore and onshore. Both functions require a unified and interconnected market so that maximum efficiency of fund, talent and land usage can be achieved. Nevertheless, offshore and onshore functions need to be separated to avoid any financial or systemic impact that the two cities could have on each other. Professor Xiao argues that this is now indeedfeasible with existing financial supervision technology. 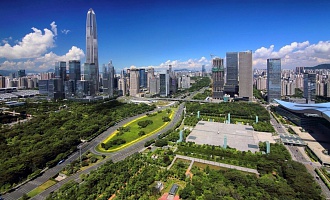