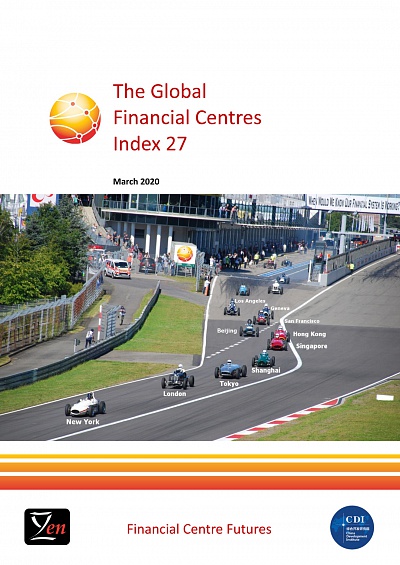 On March 26, CDI and Z/Yen jointly released the twenty-seventh edition of the Global Financial Centres Index (GFCI 27) in Shenzhen and Seoul. Financial centres are key to sustain economic growth, as they provide the infrastructure for investment and savings that drives entrepreneurial endeavours. Their prime purpose is to meet growing global funding needs, and these are expected to be particularly high for the next ten to twenty years. In a world confronted with complex issues - including technological disruption, climate change, ageing populations and social issues - access to market financing, accelerated market opening and the competitiveness of the financial centres have become major new challenges, for the satisfaction of economic and social needs. The collection of data on the different financial centres is therefore of utmost importance and should provide as objective an… 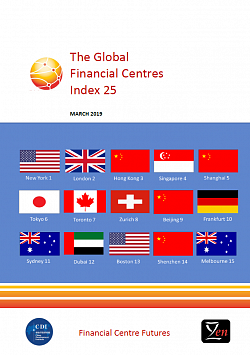 New York remains in the first place in the index, just seven points ahead of London. Hong Kong is only four points behind London in third and Singapore remains in fourth place.… There are 9 financial centres across the Chinese mainland in the main index. Among them, Shanghai rose to the 6th place. Ranking 8th, Beijings moved into the top 10 for the first…

There are seven cities across the Chinese mainland rated in the GFCI 22, namely Shanghai, Beijing, Shenzhen, Guangzhou, Qingdao, Dalian and the newcomer Chengdu. Among them, Shanghai got 711 points and ranks 6th, rising 7 places in the rankings. Beijing rose 6 places to the 10th position. Shenzhen got 689 points and ranks 20th, rising 2 places. Shanghai, Beijing ,and Shenzhen are in the top 20 financial centres. Guangzhou ranks 32nd and…

There are six cities of mainland China rated in the GFCI 21, including Shanghai, Beijing, Shenzhen, Guangzhou, Qingdao and Dalian. Shanghai got 715 points, ranks 13rd, rising 3 places in the rankings. Beijing rose significantly, rising ten places. Both Shanghai and Beijing are in the top 20 financial centres. Shenzhen got 701 points, ranks 22nd. Guangzhou has been…

Editor’s Note: CDI updated and published CFCI 8, which examines the latest development of financial hubs on the Chinese mainland.

CFCI 8, which was released on November 4, 2016, indicates that China's financial centers have a series of new features as follows:

First, the development of financial centers has become a driving force for economic growth. Far higher than the year-on-year growth rate of GDP, the total added value of the financial industry in 31 Chinese financial centers registered an increase rate of 14.6%, accounting for 8.71% of the local GDP on average.

Shanghai, Shenzhen and Beijing rank as the top three financial centres on the Chinese mainland. Shanghai (16th) is 9 points ahead of Shenzhen (22nd). Shenzhen now leads Beijing (26th) by 8 points.