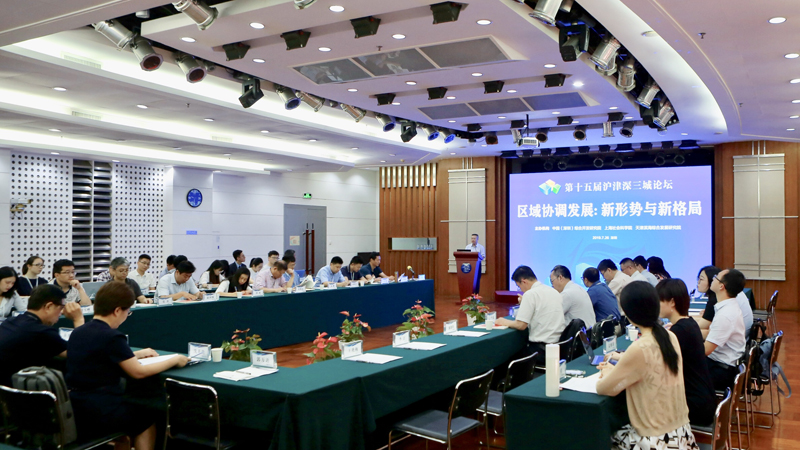 On July 26, the “15th Shanghai-Tianjin-Shenzhen Forum” was jointly held by China Development Institute (CDI), Shanghai Academy of Social Sciences, and Binhai Research Institute in Tianjin. Representatives from the three cities had practical discussions on ways to promote coordinated regional development in China.

How to promote coordinated regional development in a practical way

In view of the current international circumstances, participants proposed innovative strategies for developing regional economy and suggestions to enhance the competitiveness of city clusters.

Former Vice Mayor of Shenzhen and Vice Chairman of CDI Tang Jie highlighted the importance of having different cities playing different roles in city clusters. To enhance the overall competitiveness of city clusters, cities should cooperate in an efficient way, each with a different role to play. The success story of Shenzhen maintaining a high growth rate since reform and opening up boils down to having “the market as the dominant force, businesses as the main players, the legal system as the foundation, and the government as safeguard” in economic development. With well-established legal system and public services, the government of Shenzhen respects the choice of the market, and encourages fair competition and innovation by taking a proactive approach to market competition, promoting the overall development of the Greater Bay Area as well.

Shen Kaiyan, Director of the Institute of Economics of the Shanghai Academy of Social Sciences presented a case study entitled “Coordinated Development of City Cluster Promoting High-quality Development of Yangtze River Delta”. She believes that to promote the innovative development within the Yangtze River Delta, it is essential to ensure the connectivity between central cities and surrounding cities in road, rail transit and city buses, facilitate the seamless connection of public services for residents and businesses between cities within the region, while at the same time establish a trading mechanism for construction site quota, along with win-win cooperation mechanisms for the joint development of industrial parks across administrative areas.

According to Yang Jinxing, Vice Chairman of the Political Consultative Committee of the Tianjin Binhai New Area, innovative thinking is crucial to making breakthroughs in coordinated regional development in view of the current challenges. In recent years, the Beijing-Tianjin-Hebei Region is still troubled by city disease, regional imbalances, inadequate environment capacity and similar industrial structures among cities. Meanwhile, key obstacles must be addressed as soon as possible, in particular, the city disease of Beijing. The continued coordinated development of Beijing, Tianjin and Hebei requires innovative thinking to solve deep-seated problems such as large discrepancies in public services and impeded flow of production factors between cities.

How to promote institutional innovation for high-quality regional economic development

Huang Fengyu, President of the Tianjin Economic Development Research Institute, highlighted the importance of multilevel institutional innovation to realizing the coordinated development of city clusters. She believes that the way forward lies in fostering well-functioning systems and mechanisms, shifting policies for Beijing-Tianjin-Hebei coordinated development from administrative measures to legal and economic ones, tearing down administrative barriers for efficient collaboration among industries, and exploring a mechanism for shared benefits in the Beijing-Tianjin-Hebei region. According to Li Zhan, Deputy Director of the Institute of Applied Economics of the Shanghai Academy of Social Sciences, institutional innovation characterized by “Yangtze River Delta” + “major projects” + “big platforms” will facilitate the all-round development of the delta area. Currently, the Yangtze River Delta is still hindered by insufficient marketization, difficulties in connecting key fields of cooperation, and regional imbalances. Thus, the integrated development of the Yangtze River Delta shall follow national strategies to form new regional mechanisms across administrative areas, and make efforts in building demonstration zones, metropolitan areas and innovation clusters as a new platform for integrated development.

The development of a world-class city cluster cannot go without proper management systems.

Jin Gang, Deputy Head of the Development and Reform Bureau of the Tianjin Economic and Technological Development Zone Management Committee, believes it is important to further streamline the management of the development zone for higher efficiency, innovate in operation modes, and reinvigorate development zones in the new era with reform and innovation. He proposes adjustments to the upper structure to adapt to the needs of continued reform and marketization, while making strong efforts in promoting political institutional reform suited to the current economic reform, so as to better serve the interest of the people. Moreover, it is important to create an enabling environment that meets the needs of the businesses in the development zone. Zong Chuanhong, Head of the Regional Development Section of the City and Population Development Institute of the Shanghai Academy of Social Sciences, said that more advanced urban precision management requires differentiated but coordinated development. Regional integrated development must serve cities’ need for continued development, with strengthened cooperation on law enforcement, harmonized management standards and integrated public services, as well as enhanced social governance capability for a more vigorous society.

An Ran, Deputy Director of the Sustainable Development and Marine Economy Department of the China Development Institute, believes that a city’s ability to innovate in management will have impact on the sustainable development of mega-cities. Taking the example of Shenzhen, he suggests that efforts must first be made to further develop the system of the intensive use of urban spaces and water resources, efficient use of energy and recycling of household waste; second, make breakthrough in core technologies of environmental protection and overcome key bottlenecks; third, innovate in medical system with improved health policies to provide full-cycle comprehensive health services for citizens; and fourth, strengthen institutional reform and innovation in social governance to achieve sound interaction between governance, social adjustment, and resident autonomy under party leadership.

Innovation-driven development strategy provides a strong impetus for regional economy, with scientific and technological innovations contributing to both the quality and effectiveness of regional economic growth.

Zhang Jianbo, Director of the Institute of Applied Economics of the Shanghai Academy of Social Sciences, believes that for the integrated regional development of the Yangtze River Delta, the rule of competition should be developed as the coordination mechanism with market competition as the micro-foundation of regional economic integration. In addition, collaboration among cities with differentiated roles constitutes the industrial order for regional economic integration, while cooperation between industries and research institutes is key to achieving synergy and enhancing competitive edge in collaborative innovation. Zhao Guoqiang, Secretary-General of the Tianjin Hi-Tec Entrepreneurs Association sees the Tianjin-Shanghai-Shenzhen Technology Collaboration and Innovation Platform as a new model of innovative development, which serves to replicate, spread, and promote success stories in industry development of China’s advanced cities for the benefit of industrial upgrading. Moreover, the combined effects of the obvious spillover of human resources, capital and technology will be of tremendous importance to achieving more balanced regional development for the economy as a whole.

Cao Zhongxiong, Executive Director of the New Economy Department of the China Development Institute, pointed out that the development of the innovation system of the Guangdong-Hong Kong-Macao Greater Bay Area will play a significant role in mitigating the negative impact of trade frictions on China. First, it is essential to foster a regional innovation ecosystem by building regional innovation platforms, in particular the “Guangzhou-Shenzhen-Hong Kong-Macao” innovation and technology corridor; second, make up for weaknesses in basic scientific research and create science centers to boost scientific and technological innovation with better synergy between governments and enterprises; third, develop innovation alliances featuring “flagship enterprise + supply chain” for stronger supply chain collaboration; fourth, foster a sound chain for technology innovation featuring “basic research + technology development + industrialization + financial support” in a favorable environment of innovation and R&D for startups; fifth, encourage businesses to establish overseas innovation platforms with supporting policies, and attract international innovators to Hong Kong and beyond. View the embedded image gallery online at:
http://en.cdi.org.cn/component/k2/item/633-the-15th-shanghai-tianjin-shenzhen-forum#sigProId7ecbfe0766
back to top