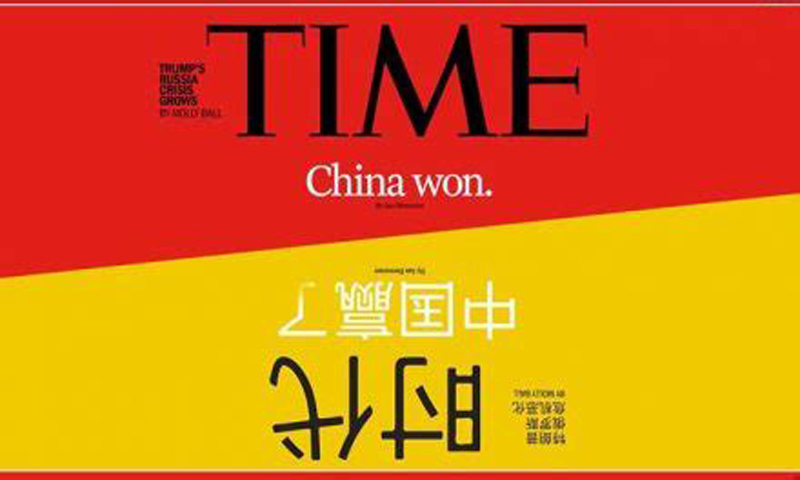 Editor’s Note: “As an economist, I am very proud of achievements of China’s economy. However, it is crucial to keep a realistic and sober amidst the chorus of praise. There will be something wrong if we do not address problems facing China’s economy,” said Prof. Fan Gang.

Recently, especially since the beginning of 2018, public opinions in domestic and abroad have seen a great change from the previous decries to the current praises. The cover story in Time was titled “China won” and domestic opinion leaders also started to applaud the rise of China. It is however crucial to keep a realistic and sober amidst this chorus of praise.

Indeed, China has made great strides, especially in manufacturing. A short documentary made by KJ VIDS, a British media company, mentioned that by 2005, the construction area of China in every two weeks is as big as today’s Rome. Moreover, the production value was able to create one Greece every 16 weeks and one Israel every 25 weeks. Despite these great achievements, we need to be aware of the existing problems. For example, China’s per capita GDP in 2017 was 9600 US dollars, making China rightfully a middle-income country. However, it was less than 20% of that of the United States. Problems will arise without a sober mind towards addressing our weaknesses.

One neglected achievement is that China’s economy has maintained high growth rate in 40 years with no crises, which is unprecedented in the world. Developed countries, in the early years of rapid development, saw economic crises every 10 years or so. China’s economy also has its cycles, with highs at around 14% and lows at 6%. What has made China’s economy unique in the world is that it has never experienced major economic crises or recessions. This is partly due to lessons learned from the bursting of bubbles and financial crises experienced by developed countries over the past four decades.

Economic landscape and growth of China

China’s economy went through a cycle in the 1990s, got over-heated from 1992 to 1994, experienced a five-year downturn from 1995 to 1999 and remained mired in a soft patch from 2000 to 2002 until finally recovering after the SARS outbreak in 2003. The second overheating came in 2005 and lasted till 2007. China went through a self-imposed restructuring as the world was hit by a financial crisis in 2008, and saw a periodic peak between 2009 and 2010 due to economic stimulus. Another downturn was experienced from 2011 onwards until the economy touched the bottom in 2016 and started to warm up slightly in 2017; however, the economy was not bouncing back and would still stumble at the bottom for a while with certain unsolved issue.

In the short term, China’s economy will maintain a 6.5-7% growth rate with a neutral macroeconomic policy without either stimulus or tightening, which will facilitate ongoing reform and restructuring before entering the next round of growth. It is thus important to see economic growth from a periodic point of view, and regard economic downturns as fluctuations. One thing that is worth noting is that it takes longer for China’s economy to complete the process of soft landing than to restructure during crises. In the long term, we should be fully aware of the challenges facing China’s economy, including rising labor and environmental cost, a widening income gap and a global landscape under newly emerged risks.

Potential is huge too, with per capita GDP at only 9000 US dollars, industrialization rate less than 70% and 30% of the labor force living primarily on agricultural income. Only 55% of Chinese people lives in cities and 70% of the population are low-income people, half of whom being farmers and half being migrant workers. Overall, China has low levels of consumption and high savings rate, with family consumption representing a mere 30% of the GDP. We shall have confidence in exploring this potential.

The “Trump effect” has indeed contributed to the rise of protectionism. What Trump does remind governments around the world of the need to reduce tax burdens on businesses, which is good. He deems that Chinese government has been correct in taking advantage of other countries for the interest of Chinese people, while the US government has failed to do so for the interest of its people, which is why he tries to make up for this gap. In future, he is likely to take measures in trade.

China wishes to continue to attract foreign capital to gain know-how for its own development and many policies recently rolled out by the Chinese government encourage foreign capital to enter China by improving business environment. At the same time, China has also entered the stage of going global. High savings rate over the past two decades has accumulated a significant amount of capital, which will only lead to excess capacity if invested in the domestic market. Therefore, Chinese businesses should now compete in the world market and utilize global resources to seek new growth engines. China benefits from and advocates globalization, which will certainly continue to grow despite such setbacks as the rise of trade protectionism and short-term retreat.

First, business environment. China’s policies are increasingly pro-innovation and pro-entrepreneurship, with more tolerance of problems that might arise from innovation. For instance, the messy outcome of bike sharing is unimaginable in many countries, but is treated with tolerance in China. In China, new things get a chance to survive, and when there is a problem, supervision follows. In the next few years, a big share of China’s growth will come from innovation and entrepreneurship.

Second, the development of financial systems, especially direct financing mechanisms. In the past, businesses took out loans from banks, but now they have more options, such as venture capital, PE, or selling equities. Finance plays a fundamental role in spurring innovation and entrepreneurship and the development of the financial system will come as an engine for economic growth in future.

Third, consumption growth. In the past, people born in the 1980s and 1990s used to be the main force of consumers, while retirees, who had little disposable income, spent very little. Things are different today. The wealthier generation begins to retire, and with both time and money, starts to consume more, transforming the country’s consumption pattern.

Fourth, manufacturing development. The improved quality of some Chinese manufacturers will contribute to a stronger image of “made in China”, instead of being a synonym for shoddy products. With improved consumer confidence in our products, the manufacturing sector will embrace a new round of growth.

First, that all industries have potential for growth does not mean all enterprises enjoy the same prospects, as they would experience constant mergers and restructuring. In the end, big enterprises will become even bigger and small enterprises will get merged into bigger ones. Enterprises shall fully consider how they would be merged so as to improve their production and innovation capacity. Research on the overcapacity in the steel industry in the American history suggests that the cause is vicious competition for resources among private enterprises during rail construction. J.P. Morgan played a dominant role in the mergers of the US steel companies with over 700 companies organized the steel industry and 200-300 companies out of business, which is a classic example of mergers. Trump once said that he enjoyed economic slumps when is a good time for mergers. Mergers and acquisitions are the destiny of many businesses. This is a good thing, as businesses can channel the return on investment into new undertakings.

Second, the manufacturing sector still has huge potential. In the 1980s, Korea was concerned about the industrial hollowing-out effect, worried that it would experience recession when industries move to China. However, the Korean economy has proved otherwise, gradually advancing to high-end growth. This rule also applies to China. We will be able to move forward as our manufacturing sector continues to climb the value chain.

Third, application of new technologies, and in particular, the internet. The internet is a public technology and serves every individual, company and industry, which makes it crucial for industries to keep pace with the information trend.

Fourth, professionalism and dedication. Successful companies are invariably those that are dedicated to their businesses and persevere for a long time, a quality that is indispensable in pursuing craftsmanship and an upgraded version of “made in China”.