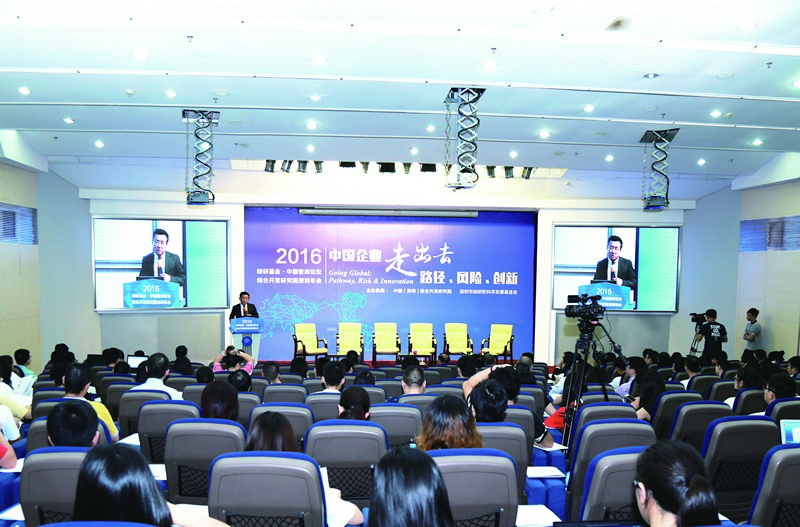 Themed on “Going Global: Pathway, Risk & Innovation”, the meeting convened entrepreneurs and experts to have discussions on approaches and risk management for Chinese enterprises that expand their business abroad.

The meeting gathered experts and entrepreneurs to have an intense discussion on Chinese enterprises going global in the context of the Belt and Road Initiative.

The session will discuss the status quo and development for enterprises going global and how to prevent risks, and establish the platform for enterprises when they are confronted with differences markets, languages, and laws in different countries.

This session will discuss the innovative strategy for enterprises going global, especially for small and medium-sized enterprises to build their own brands with their advantages.

CDI Shenzhen Annual Meeting 2016 themed on “Going Global: Pathway, Risk & Innovation” was held in Shenzhen on August 6. The best quotes from the forum are shared as follows:

There is a continuous significant increase in economic and trade connect between China and countries along the Belt and Road. Under the strategic background of the initiative, Chinese enterprises should choose right investment destinations, build industrial zones and economic cooperation zones overseas, accelerate the completion of iconic early harvest projects, and go global in group.

“Growth of overseas direct investment is an important way to improve utilization efficiency of savings.”

It is normal that investment is “cold internally and hot externally” at present, because the Chinese economy is in the process of adjustment and at a periodical low ebb, and thus enterprises are looking for opportunities externally. But the reduction in domestic private investment is somewhat attributed to the factors of system and investor confidence, which calls for attention.

“All issues about China’s economic structural reform boils down to whether zombie companies can exit smoothly.”

The key to supply-side structural reform is to promote replacement of old industries by new ones. However, the existence of a large number of zombie companies not only reduces the resource utilization efficiency, but more importantly, increases the financing costs for non-zombie companies, and has a edging-out effect on emerging industries.

“Small and medium-sized enterprises have become the main force of innovation.”

“Going global” requires a full understanding of the market, including market demand, investment environment, legal system, human resources, and financial market, so as to minimize information asymmetry. Meanwhile, it is also necessary to resolve financing problems, cultivate international talents, resolve the issue of cultural integration in merger and acquisition, and go global in group, so as to avoid overseas cutthroat competition among Chinese enterprises.

Wang Jiazhuo, Professor of the City University of New York

“Enterprises should go global in group rather than individually in the future.”

Shenzhen’s actual overseas investment in the first half year increased by 200% compared with the same period of the previous year. Currently, Shenzhen's main investment destination is still Hong Kong. A platform should be built to integrate overseas investment information and industry updates. A system of financial services and risk prevention should be established to make good use of funds from government, financial institutions and private sector. Meanwhile, talent support should also be given.

“Think tanks should do something to prevent the risks for Chinese companies going global.”

As Belt and Road Initiative moves ahead, going global has become a prevailing trend. However, risks exist, and analysis and research should be strengthened to prevent such risks.

“China is at a critical point in the process of manufacturing industry going global in bulk.”

With regard to the industry-specific path of going global in developed countries such as Japan and US, etc., at the early stage it most focused on such fields as energy and raw materials, and expanded to the manufacturing industry later. Similarly, the overseas investment by the Chinese manufacturing industry still accounts for a relatively low proportion, which will grow in the future.

“Adhere to the principle of leveraging China’s advantages and making use of local wisdom.”

By the end of 2015, the overseas business revenue of CIMC had exceeded RMB 40 billion, accounting for 57.5% of the group’s total revenue. CIMC’s production and sales bases and R&D centers are located across the world. CIMC fully respects the local interests, and strives to improve corporate efficiency through management skills and market integration. With market-oriented and globalized commercial language, it has touched the hearts of overseas partners of different races and different cultures.

“Operation export is of great significance, and signifies a country’s soft power.”

The overseas projects of Shenzhen Metro perfectly match the Belt and Road Initiative. These projects are located in Central Asia, Africa, and the Middle East. The going global of the metro sector involves the export of technical standards and management culture. In the process of going global, governmental support is required when enterprises encounter problems such as foreign exchange control, which cannot be resolved and avoided.

“Low cost, high output, and accessibility are the three secrets that can change the world.”

As an inborn global enterprise, BGI has provided medical gene sequencing service in more than 60 countries in the world. Shenzhen can truly become a leader of innovation instead of a weeded-out “Silicon Valley”in the era of life science, if it can establish a “special medical zone”, like it established a special economic zone in the past, where any medical technology which is applied in Hong Kong and the US can be used.

Beike Biotechnology has been “going global” ever since its birth. It has established the first stem cell bank standard in the world, and provides services for patients in 70 countries. We are in an era of life science revolution. We do not expect our scientific research to be the best in the world. We are just one of those scientific research organizations in the world. We should leverage China’s advantages of huge market and platform, so as to make use of global R&D results.

“Invest in merger and acquisition, and realize transformation and development.”

TCL Group operates globally, and now more consideration is given to emerging industries. Therefore, TCL Venture Capital mainly invests in some risk funds and industry funds in the US and Israel, so as to look for good projects to promote the growth of new industries.

Liancheng Overseas Fishery was established in 2002, and its main business is developing the tuna industry in South Pacific island countries. Currently, it has developed operations of fishing fleets, overseas bases, transportation and marketing. Resource-utilizing industries need to be rooted locally and be integrated into the local culture by promoting local economic development and job opportunities.

View the embedded image gallery online at:
http://en.cdi.org.cn/component/k2/item/263-shenzhen-annual-meeting-2016#sigProIdc4471718fa
back to top